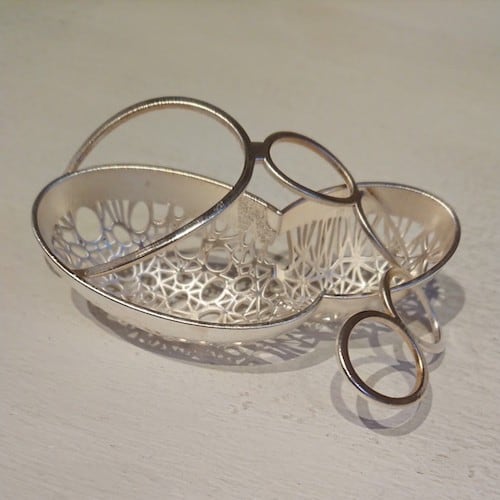 Beate Gegenwart is a maker, curator and academic who lives and works on the Gower Peninsular near Swansea. Originally from Germany, she studied at the University of Wales, Cardiff and the University of the West of England, completing two Master degrees. Drawing, mark-making, the explicit connections between material, process and maker as well as an emphasis on concept and idea are all central to her practice as an artist.

She has exhibited nationally and internationally and curated numerous exhibitions, touring to North America, France, The Netherlands and Germany. Her work is held in both national and International collections.

Gegenwart’s primary material is metal and she works mostly with vitreous enamels (glass) on steel, further developed by drawing, mark making, abrading. Firing the pieces several times, the surface is ground and abraded to a matt finish in places, creating new relationships with the enamel; a crossing point between control and chance. Her work is also informed by a passionate interest in digital technologies such as laser and water jet cutting as well as 3D printing.