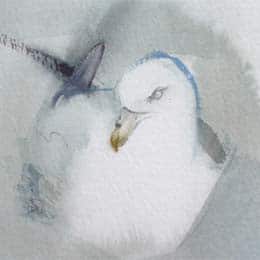 Claire was born in Ayr and graduated from Glasgow School of Art in the early 1990s. In 2005 she was elected member of RSW (Royal Scottish Society of Painters in Watercolour).
With a passion for the natural world – birds, wildlife and landscapes, Claire’s painting has taken her around the world – Antarctica, Outback Australia, St Kilda, India, the Galápagos Islands – all places where, in extreme environments, survival is difficult and the balance of life is delicate.
In 2009 she visited several of Kenya’s National Parks, her first time in Africa.
From the source material gathered, memories are digested, ideas develop and the paintings, predominantly in watercolour, are realised. Working intuitively her work is immediate. The energy of movement is mirrored in the action to paint it and to strive for a painting to look as effortless as flight is a constant challenge.

Claire lives and works in Perth