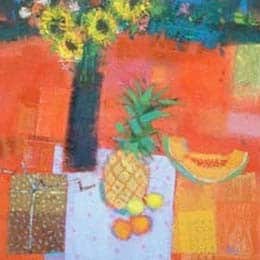 Francis Boag was born in Dundee in 1948 and studied at Duncan of Jordanstone College of Art in the late sixties. His tutors in Dundee included Alberto Morrocco and David McClure, whose influence can be readily seen in his love of vibrant colour and the sensuous application of paint.

Francis continued to paint throughout a successful teaching career, which saw him teach in Dundee and Perth before being appointed Head of Art at Aberdeen Grammar School in 1989. It was this move to the North East which signalled a major change of direction in his work and in 1995 his expressionist interpretations of the local landscape first began appearing in Galleries in the North East  .

The demand for his vibrant colourful paintings grew rapidly and his work was soon in demand from Art Galleries throughout the UK and Ireland.

In 1999 a major commission from John Lewis plc for three large paintings for permanent display in their new flagship store in the Buchanan Galleries in Glasgow prompted Francis to take a year long sabbatical from teaching. During this period he studied for an MA at Grays School of Art; a research-based course, which required among other things that he reflect deeply on his own work and try to see it in the wider context of current contemporary art practice.

Fortunately for the artist, the developments in his work triggered by this challenging period met with great enthusiasm in the commercial Gallery market and demand for his work increased. This enabled him to leave education and become a full-time professional Artist in June 2001.

During 2003-04 he had exhibitions throughout the UK and also New York, Dublin, Belfast, Paris, Munich, Seattle and Michigan. 2005 will also see his work on view in Russia, Australia, Cannes and the Italian Riviera  His feature in the ‘International Artist’ magazine has helped to raise his profile in the USA, and his work was shown and discussed at a talk given in November 2002, by the American editor of the magazine to the Allied Artists of America. He also contributed a chapter on outdoor sketching for their book, ‘Work small, learn big’ which has sold well all over the world.

His best-selling prints have found their way into a host of public buildings such as airports and hospitals and his original work is increasingly sought after by large corporate collectors including John Lewis plc and the Royal Bank of Scotland.   Since 2003 his images have featured regularly in the catalogues of the international children’s charity, Unicef. He is the only Scottish artist to be included in their Fine Art collection.