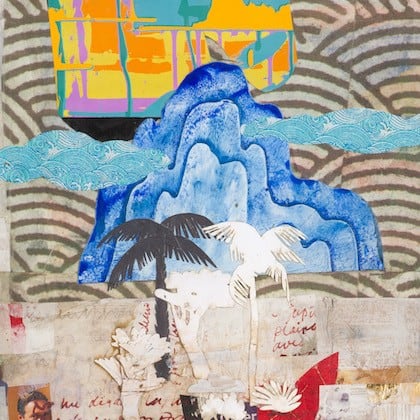 George Donald is a painter, printmaker and lecturer in studio arts.

Born in South India into a colonial family, his early memories are of the colours and rhythms of the East. He studied at ECA and was awarded a travelling scholarship to India, Afghanistan and Nepal. Later, at Hornsey College of Art, London (then, in the late 60’s at the forefront of student-led changes in visual education) he studied art education. He taught for many years within the D&P School of ECA, and in 1999 co-founded the Centre for Continuing Studies – a centre for innovation and excellence in higher art education, and the first to offer part-time BA degrees in visual arts.

In mid-career, he returned to University of Edinburgh to study philosophy and education. Donald had travelled widely as an art lecturer: with the British Council in India and Korea and as a visiting artist/tutor in France, Spain, Japan, China, UAE and USA. He is a Member of the Royal Scottish Academy and the Royal Scottish Society of painters in Watercolour.

He retired from full-time teaching in 2001 to concentrate on making art, exhibiting, occasional teaching and consultancies. He is currently adjunct professor in the Art Dept. University of Central Florida. He has been Keeper of the RSA since 2003.