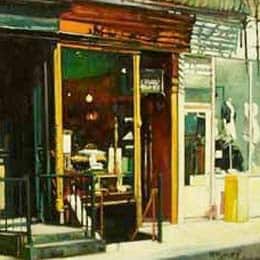 Joe McIntyre was born in Dundee in 1940 and schooled and studied art in Dundee until 1964 when he graduated in Fine Art from Duncan Jordanstone College of Art. He was thereafter awarded a Post Graduate Scholarship and a Royal Scottish Academy Bursary in 1965.

Since 1972 Joe has taught part time at The Duncan Jordanstone College of Art in Dundee and has split his time between that and painting professionally.

He is a regular exhibiter in many Scottish galleries and has shown his work in a number of prestigious galleries in London and also in USA.

His work is present in many important public and private collections including HM The Queen, HRH The Duke of Edinburgh, HRH The Late Princess Margaret, The Lincoln Centre New York, Pernod London,The Scottish Arts Council and The Fine Art Society London.

Joe is inspired by the American Realist Edward Hopper who’s work he finds evocative and captivating.

Joe creates “atmosphere” in his paintings through highly skilled use of light and shade and a rich warmth through careful application of colour. He has made “trademark” his pieces featuring figurative city life and at a level that his work is instantly recogniseable to his many admirers and collectors.