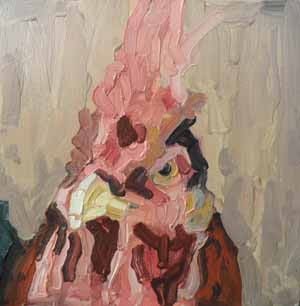 Martin Hill is an artist currently based in Dundee, Scotland, predominantly specialising in expressive oil painting.

He studied at Duncan of Jordanstone College of Art and Design, and based on the success of his degree show he was selected and shortlisted for a multitude of ‘Best Of’ graduate exhibitions, including the Royal Scottish Academy’s ‘New Contemporaries’.

He was also awarded the 2009 Barns-Graham Travel Award which facilitated a journey to Greece, a country which has inspired and informed a great deal of his work.

Following the aforementioned award, he was invited to participate in the one hundred and eighty fourth RSA Annual Exhibition in 2010.  He regularly exhibits across the country, and has enjoyed several successful solo shows, notably at The Sutton Gallery, Edinburgh, Roger Billcliffe Gallery, Glasgow. and Gallery Q, Dundee

He also has work in the private collections of the University of Dundee and the Royal Scottish Academy of Art and Architecture.

Proclaimed as “One of Scotland’s most exciting young painters” (Artmag May/June ‘14), Hill’s paintings are characterised by expressive handling and lively brushwork.

Bestriding genres and subjects, and with conscious nods to art history, his work has been described as “expressive and distinctive, drawing on both landscape and figurative traditions.” (informededinburgh.co.uk June ‘14), while similarly being termed “expressive and poetic” (galleries.co.uk May ‘14)