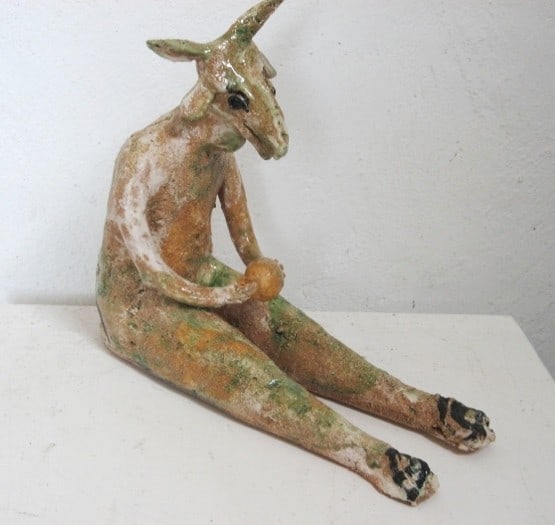 Meri Wells studied ceramics at the University College of Wales in Aberystwyth. Her distinctive figures and glazing are recognized throughout the world of ceramics and she is an elected member of the International Academy of Ceramics and the Royal Cambrian Academy.

Meri works with coiled, grogged clay and soda fired in a wood kiln to stoneware temperatures, using locally sourced slips and ash glazes, in a tin shed in a valley in mid-Wales.

She says about her work: “The small ceramic figures come out of the hedge that I can see from the window. They march past reviving forgotten imagery of childhood stories and our cultural myths. I try to draw them in that first fleeting glimpse. They are best viewed in groups, from the perspective of personal history and the elemental associations with certain places.

The larger, often lifesize, sculptural pieces, are, I believe, a result of disillusionment with how we repeatedly fail to sustain a functional society. So I based these on forms which inhabit a parallel universe and often they are self portraits.”