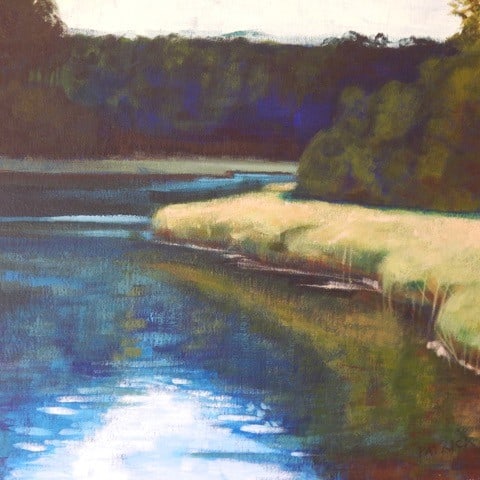 Pauline Patrick was born in Helensburgh, Scotland in 1963.

She trained at Glasgow School of Art under the tutelage of John Cunningham, graduating BA (hons) in 1985.

She developed a successful career in art education which culminated in lecturing  at both Strathclyde and Glasgow universitie. In 2009 she embarked on a doctoral study based on art practice and art education, graduating in 2014.

This study combined traditional research methods with art making, an experience which led to the realisation that it was time to return to her first love – painting.

Her subject matter ranges from her native Scottish landscape to further afield and recent painting trips abroad have included Venice, Provence and Cádiz.

As with other Scottish artists, she was drawn to these locations in search of new inspiration and the opportunity to capture a different light and culture.

Her work derives from first hand observation in the form of sketching and painting outdoors, later developing these en plein air studies in the studio.

Oil and acrylic on linen panel is her choice of media and the process of producing the painting is as important as the final product.

Her compositions are defined by her excellent draughtsmanship, thoughtful composition, bold brushstrokes and rich colour.

She is represented by leading galleries throughout the UK and is attracting the interest of discerning collectors both at home and abroad.

ne Patrick was born in Helensburgh, Scotland in 1963. She trained at the famous Glasgow School of Art under the tutelage of John Cunningham, graduating BA (hons) in 1985.